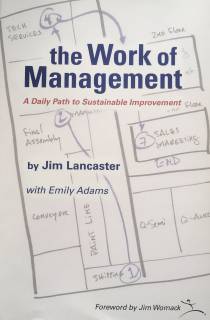 The Work of Management

For thousands of managers curious about lean thinking, Lantech was the first glimpse of this new world. A mid-sized industrial equipment manufacturer in Kentucky, Lantech became one of the first companies outside of Toyota and its suppliers to truly embrace the concepts of the Toyota Production improvement teams at Lantech dramatically transformed operations,creating better flow,removing batch processing,and freeing up millions of dollars in inventory.They became the Kings of Kaizen, or continuous improvement.Made famous in the seminal book Lean Thinking,Lantech’s Leaders generously opened their doors and invited int he world to see how just-in-time manufacturing looked in reality.

So much energy and excitement was generated by this initial work that it took years before Lantech’s managers saw troubling signs.Promised savings after the initial lean leap were no hitting the bottom line.Kaizen improvement fell apart easily and often.

The company then passed from founder Pat Lancaster to son,Jim Lancaster,who tells the story here of how Lantech initially triumphed and then stumbled badly,nearlyu losing its way,before finding the key to sustainable improvement in a daily management system.With a focus on maintaining processes before improving them,and on daily standardized work for managers throughout the company,the team at Lantech has been able to improve their margins as never before and compete globally against much larger firms.

With the help of Bob Morgan,a lean coach who had previously transformed a number of Toyota.