FEATURE – Having dedicated clinical paths for specific types of patients is a well-known method for reducing waiting times. By doing it, Siena University Hospital managed to slash delays by 80%.

Nobody likes to wait, and the worst place in which one might find oneself waiting is probably a hospital. Well, once discharged, our patients in the Intensive and Critical Care unit here at Siena University Hospital often had to wait for a very long time for a bed to free up in their next destination – whether another area of the hospital or a rehabilitation center.

The numbers were rather scary: our analysis revealed that over a period of five months (we observed our processes from July to November 2015) our patients needlessly remained hospitalized for a total of 57 days, due to the lack of available beds in receiving locations. The people who had to wait the longest were medical patients (requiring no surgery), followed by those with serious acquired brain injuries and non-surgical injuries who needed transferring to another area of the hospital or another facility altogether.

We mapped the clinical paths for these two types of patients to highlight the delays in the process and to understand why, upon leaving the ICU, they were not transferred – instead racking up days upon days of unnecessary hospitalization (as many as 10 in one instance). The two paths are illustrated below:

Using the 5 Why’s technique we realized that the delay in discharging patients was indeed due to the lack of available beds, but that its root cause was actually a failure to plan patient transfers ahead of time and to establish standardized clinical paths.

Therefore, we set a double goal for our department: to cut the waiting time by 50% for patients (no longer in need of intensive care) with both medical pathologies and serious brain injuries, by clearly defining discharge criteria and introducing dedicated clinical paths for them. We then redesigned the two patient flows with the idea of finding that winning strategy that would eliminate the long waits. After all, why wait for the patient to be transferrable to start looking for a bed outside of the ICU?

The two flows entail the exact same steps, the only difference between them being the type of patient they refer to. So, once the most critical phase in the ICU has passed, the presence of patients is now communicated to either another medical area within our hospital or the rehabilitation center, a few days before the actual transfer is to take place. With this new system, the receiving facility is almost always ready to welcome the patients.

To help the people working in the ward to really embrace the new system, we installed a visual board that allocates patients to two categories (“medical” or “surgical”), based on the diagnosis we make when they come in, and allows us to track their status. As soon as a patient can be discharged, their name (or rather initials) goes up on the board, indicating whether they have a medical condition or require surgery. During the daily 11:30am meeting, then, the intensive care doctor will notify the team that a certain patient will be dischargeable within a few days, and his or her initials go up on the pre-alert column of the board. (The initials of patients with acquired brain surgeries have their own column on the board.)

Knowing what category the patients belong to up front tells us who will follow the new clinical paths and who won’t, thus ensuring the discharge process happens as smoothly as possible. The board also displays the expected date in which the receiving facility will be pre-alerted of the patient’s upcoming arrival (including the rehabilitation center for those patients who are headed there).

Thanks to the active participation of every staff member in the ward, the new clinical paths were launched in July 2016. For the following four months, we have measured the waiting time for transfers of both type of patients, realizing that the results we have achieved have far exceeded our expectations. To everyone’s delight (the patients’ more than anybody else, one might say), we were able to reduce the waiting times for transfers out of the ICU by around 80%.

To read about other lean projects at the Siena University Hospital, click here, here and here

For a case study on the hospital’s overall lean journey. 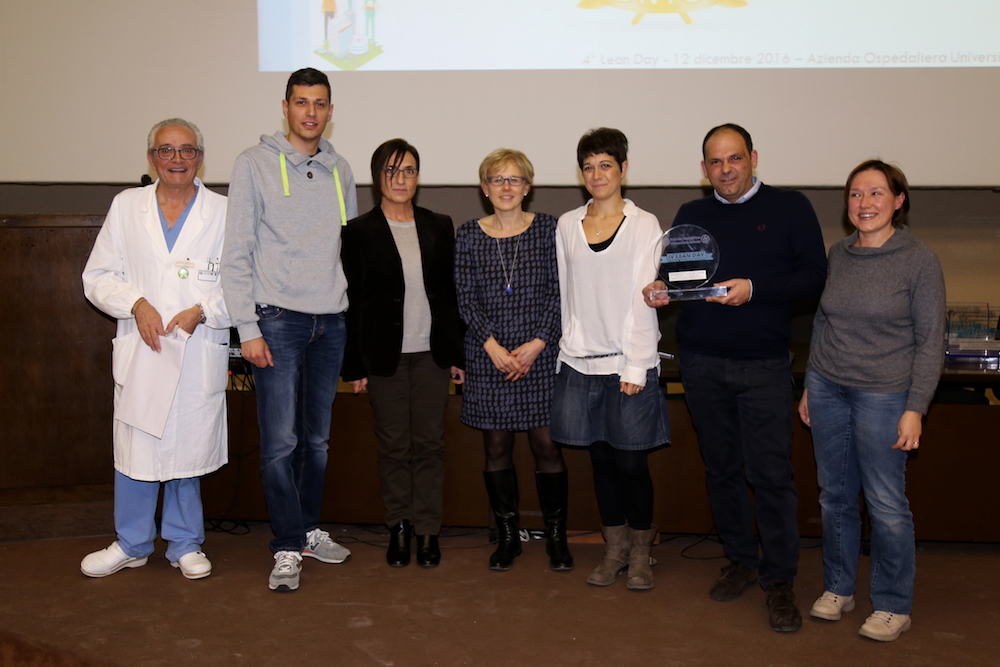 The Siena University Hospital team who wrote this article: