CASE STUDY – Here’s the story of a mature lean company from Michigan. The author tells us about Zingerman’s Mail Order’s lean transformation, their challenges and their successes. 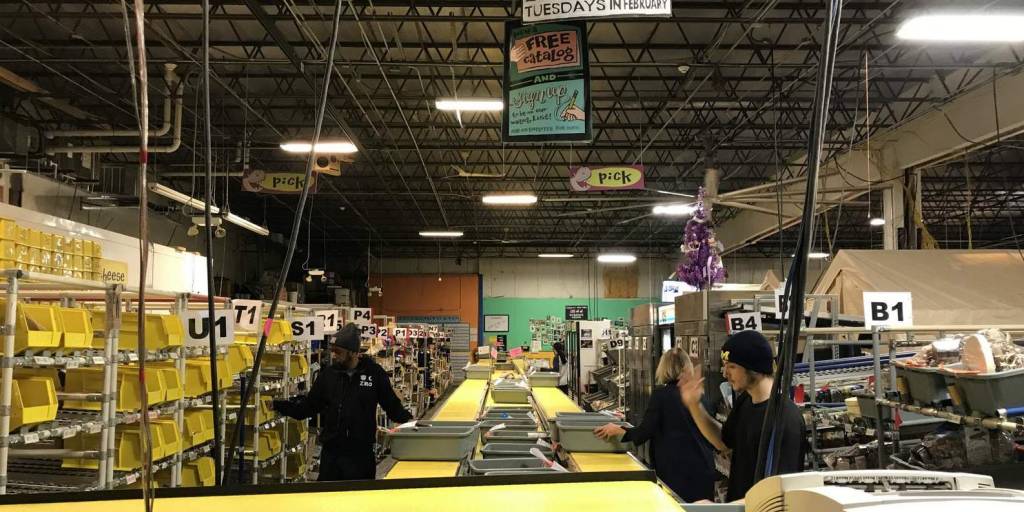 We have been on a lean journey for a very long time at Zingerman’s Mail Order. We started off around 15 years ago, when the company was 10. During our first decade in business, we were fortunate to grow substantially – 20-30% year on year.

While this was great for business, we constantly found ourselves struggling with capacity (or lack thereof): we had to move three times in six years because we kept outgrowing our physical space. There never seemed to be enough space! At one point, we bought a building, occupied half of it and rented out the other half; two years later, we took over the entire space, knowing that in another two years we’d have to move once again.

We didn’t want to relocate (not to mention, spend the large amount of money it cost each time we had to move such a large operation), but didn’t know what to do. We were desperate for a solution.

At that time, one of my fellow co-owners (there is three of us in total) was getting an MBA at the University of Michigan, during which he was introduced to The Toyota Way. He sent us a copy of the book, saying there might something in it that could help us in our predicament. While reading it, I remember thinking “Duh!” and very naively believing lean thinking would be easy to implement. We began to talk about it as a management team and, before too long, one of us said he recognized the name of the author. “I am pretty sure Jeff Liker is one of our customers!” he said. He was (he is an Ann Arbor guy) and we reached out to him asking if he knew anybody at the university who would be interested in using Mail Order as a test case.

That’s how we got introduced to Eduardo Lander, a student of Liker’s who was working on his dissertation on lean applied to hyper-variable demand systems. Eduardo ended up spending three years with us, trying to figure out whether or not lean thinking could even work in an environment like ours. As a curator of international food products, our pick-pack-and-fulfilment operation is highly seasonal, with 50% of our volumes being handled over four weeks in December (people love our gift baskets!) and the other 50% spread over 11 months. Would heijunka even work at Zingerman’s?

A LEAN JOURNEY IN THREE PHASES

As I reflect back, I can clearly identify three phases in our lean journey:

There were a few more elements that, in my opinion, allowed lean thinking to take root at Mail Order. First of all, all three of us co-owners have had formal business education, which has taught us we could engage experts without fear. (We had done so successfully when we had to make important decisions on the design of our catalogue and on our marketing efforts.)

Secondly – and that’s the reason why I believed lean thinking would be easy to embrace – we thought we fundamentally understood one of the key tenets of lean, that the value creators are the only ones with the ability to make change and that leaders should be coaches, encourage and facilitate. Zingerman’s Mail Order was a people-centric organization long before lean came into the picture, and we always understood the philosophical implications of that.

Finally, our stubbornness played a big role. We faced a tremendous amount of resistance.

PEOPLE, THE HARD PART OF A LEAN TRANSFORMATION

When it comes to lean tools there is a playbook we can look at, as far as I am concerned. Flow, heijunka, visual management, standardization – the tools feel very familiar and not overly complicated. The difficult part is getting the buy-in of the people who will be allowing the tools to take root. If they are not engaged and well-served, lean won’t succeed.

It is because we are very aware of this that we have always placed a lot of emphasis on formalized learning, since long before the introduction of lean thinking. It represents a vital part of our people development efforts. A couple examples? First of all, it is an expectation at Zingerman’s Mail Order that every employee do two hours of formal learning every week. Furthermore, during the first 60 days of employment here, people have to take 40 hours of classroom training (a training they will then have to deliver themselves).

We have found that setting clear expectations is key to keeping our employees engaged and lean thinking alive at Mail Order. This is why we have developed the Stewardship Compact, an “agreement” between staff and leadership that outlines roles and responsibilities of each (much like citizenship does). I think this is the most fundamentally lean thing we have in place, in that it recognizes the role of people in a lean transformation and acts as a driver for people engagement.

Under the Stewardship Compact:

It’s interesting to see how, when it comes to people engagement, our challenges have evolved as we achieved higher levels of lean maturity. In the early days, the fruit wasn’t just low hanging; it was scattered all over the ground and all we had to do was bend over and pick it up. It was that simple! These days, things are different: during our holiday peak, we are at a point where we work to a takt of 6 seconds (as in, an order comes off the line every 6 seconds and is loaded onto the delivery truck) and even a half-second improvement is a major undertaking. Improvement increasingly comes in small increments now and we are aware we are not likely to make huge leaps anymore. To keep people engaged despite this, we rely heavily on Kata, which provides a framework and a regime they can follow.

The most important (and the hardest) lesson I have learned over the course of our lean journey is that people need to want lean, you can’t make them embrace it. I still have moments when I still think that the most effective thing to do would be to say, “Just do it!” But it doesn’t work like that. We can’t force people to take on something they don’t understand or see the value of. At the same time, I have seen time and time again that those who gave themselves over to lean thinking genuinely enjoy their work and their professional lives much more. With lean, everything turns into a science experiment and is suddenly full of potential. What an exciting, interesting and fun environment to be in!

OUR RESULTS PROVE US RIGHT

The Stewardship Compact, Kata, all the improvement we have made… everything we do is ultimately in the service of the people doing the work. That was our motive all along, because we knew that doing so would also benefit the organization.

And it did! There are several examples of strategic results at Mail Order that we can directly connect to lean thinking. Let me share a couple.

First of all (in connection to the problem that originally drew us to lean thinking), we went from having to move the business three times in six years to being able to stay put for 15 years – despite doubling in size. This story will sound familiar to those of you who have read the book The Lean Bakery, where the problem was remarkably similar.

In many ways, the real rewards are so much bigger than just increasing capacity, reducing lead-time or improving our financial performance. We are seeing the people who embrace lean thinking be forever transformed and become more satisfied with their job every day.

10 lean leadership lessons from our aut…