CASES STUDY – Struggling to win the hearts and minds of his people, the author took lean home, learned as much as he could about it and brought it back to his business with the idea of making everybody’s lives easier. 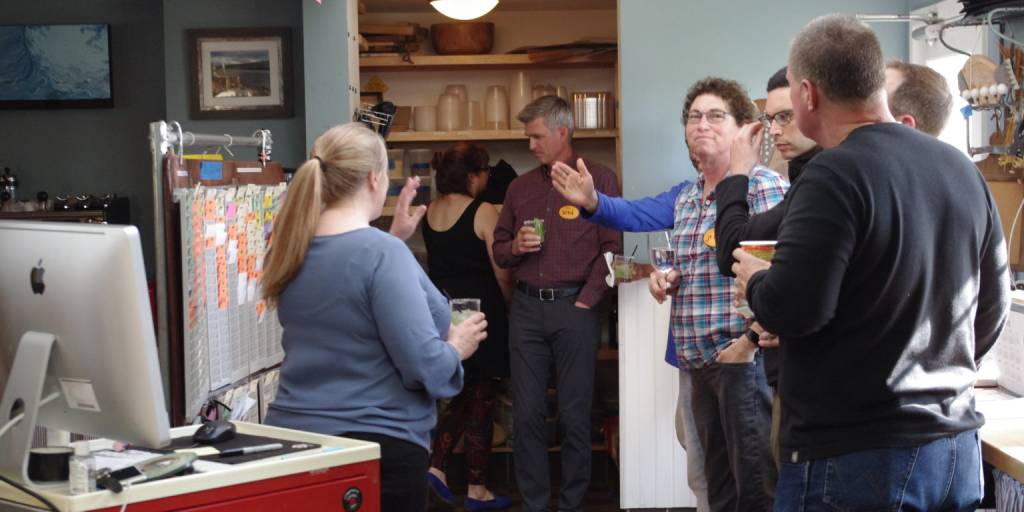 I opened Cornman Farms in 2014. We were a small team doing a big job: we host and run up weddings and other large events that, to work, require a great conductor who knows everything that’s going on and can facilitate collaboration and the flow of information. With every day that went by, I grew increasingly frustrated with constantly being that person. I didn’t see myself ever being able to step out of that role. I must admit that the stress of all the variables for that first year was gut-wrenching.

Lean Thinking became very important for me from the beginning as a way of empowering staff so that I could stop feeling like the log jam of the system. It helped me to see and accept there were many things I didn’t know, that I wasn’t the expert. I wanted to get to a point where people could find the answers to their own questions.

I had been exposed to lean through Tom Root’s work at Mail Order, and immediately got very interested in it. I was particularly fascinated by the idea of being able to reduce lead-times from days to hours. So, I dived right in and started reading about lean and Toyota extensively. Tom and I have wondered many times why I became a convert so easily, and I think it has to do with being a classically trained bassoonist (my first career ever). Musicians in an orchestra are only an expert in their field yet work together in harmony.

One of the most common challenges in a lean transformation is to get leadership to understand it and embrace it. I didn’t have that problem. My issue was that nobody else at Cornman Farms wanted to do it! For the system I was introducing to succeed, we needed a lot of lean elements and tools – from water spider routes to Kanban – to work at the same time. The almost complete lack of buy-in on the first year, however, made that impossible. And the fact that I had no other cheerleader in the team (with the exception of Tom Root, who came over from Mail Order to support me) didn’t help.

When I realized I wasn’t getting traction at work, I took lean home and turned my house into my “lean lab”. I started to run experiments all over the place: silly things like moving the closets next to the laundry room for better flow, implementing a Kanban system in our cupboards or hanging pictures to the wall of what rooms should look like after tiding them up. I got a lot of inspiration from my kids’ pre-school, where everything is simple visual management. My experiments put a bit of a strain on my marriage, I will admit, but they gave me the proof of concept I was struggling to get at the farm. I started to take Cornman Farms employees to my house, to show them how lean worked!

BACK TO THE FARM

Armed with all the knowledge I had gained at home, I brought lean back to the farm. One of the most impactful things we did in those early days was to create videos to show people how to perform certain tasks. Up until them, we’d been using very long SOPs that were not fun to write and even less fun to read. The videos changed our interaction and got people interested. They were our way to establish standards that Cornman Farms employees could access at any time using their mobile devices to immediately see what good work looked like.

We don’t use them as much today, because they are hard to edit and are therefore not adequate for ever-changing standards. But there is no doubt they represented a great baseline for us: I myself used each and every one of those videos over time, which inarguably made even tasks like cleaning the sewer ejector pump less unpleasant to perform. Sometimes, we still watch some of them, to prove ourselves how far we have come. Our history and the evolution of our processes are now our proof of concept.

Standards and visual management became part and parcel of our work. My favorite example is perhaps our system to ensure we properly lock the building: we place an animal magnet on every door, window and lock the building in the farm and collect them in the morning when we open up – a fantastic example of poke-yoke. I brought my four-year-old in one day, and he unlocked the building with the staff. That’s how simple our system is!

I believe that getting people to buy into Lean Thinking means making their lives easier. That is why fixing processes they perceive as boring or overly complicated and making them as painless as possible goes a long way. Our health inspections are a great example of this: they entail performing the same tasks, like checking the temperatures of fridges, four times a day. Each check used to take us 28 minutes, which we were able to bring down to 11 minutes by providing the team with a toolkit.

Another sign that I was finally getting some traction was that our senior manager – now my business partner Tabitha Mason – finally bought in. She was my number-one naysayer and detractor of lean at first. She thought it was crazy and that it would never work, but today she is even more of convert than I am. What finally won her over was being able to fix the coffee ordering process: it sounds simple enough, but it took us six months to get that SOP to work. Food and produce ordering is typically done by the chef, using as many as 20 different factors – from the type of guest to the age blend, from the time of the year the event is taking place to what food guests are having. Even a process as complex as this could be documented and successfully replicated, and that was a revelation for us. It’s not necessary to learn everything: all you need to do is carry with you a stack of cards you can refer to any time you are in doubt.

Getting Tabitha on board was great. Over time, she introduced Lean Thinking to areas I wasn’t going to, from the logistics of sitting people down to marketing, from sales to the guest journey though the business. These days, we use 42 folders to track our guest experience from the moment they book an event with us.

Around two years ago, Tabitha and I realized we had to take our hands off the wheel and let the team drive. We’d become the log jam in the system again, because any big change now depended on us. Letting go was one of the hardest things we did, because we had to let our people go through all the same mistakes we had gone through. I believe it’s the only way to learn. They couldn’t just pick up from where we left off; they had to go back a few steps and learn for themselves, even if that meant slowing down our transformation. Time and time again I had to resist the urge to step in; I found that even giving advice wasn’t very helpful.

The hairiest change we implemented, but also the most effected, was adapting our schedule to the actual work and the guest timeline. We had been reluctant to do it, because it entailed mapping the whole day (we are open between 18 and 20 hours a day) and the myriad tasks we have to perform throughout it. I thought it wasn’t even doable, but Tom insisted that documenting every little step in the end-to-end process was the only thing that would work. He was right. It was horrible work, but it was life-changing: it told us when the key touch points were (when the bride arrives, the cutting of the cake, etc) and when we had to complete the activities necessary for that touch point to be met without any glitches. We then laid out every type of variation we could experience, and immediately figured out how long we needed for each task in the different scenarios. We had never looked at our process like that. For the first time, we realized how many people we actually needed on each activity. It changed how staff felt they were being supported. That’s when they really realized that we were there to help them with their problems.

Critically, scheduling to the work bell curves allowed us to properly allocate our resources and save $5,000 in labor every month. That’s when we started to see our financial gains. Having introduced lean at the very beginning, we had nothing to compare our performance to. We also implemented a two-bin Kanban system that drastically reduced the number of items we were carrying – from light bulbs to ingredients. If an item was only used once a year, we stopped having it in stock. We even adapted our menu to take out products that we almost never use but still took shelf space. These measures resulted in our food stock dropping from $86,000 to $32,000. When we first opened, inventory took us between eight and nine hours; today we can do it in 45 minutes. In the early stages of our transformation, it was very frustrating to see how some of our people thought that, through our lean efforts, we were trying to document their jobs out of existence. We had hired great firefighters and now they we were trying to stop the fires from happening, people were afraid they’d soon become redundant. Many of them could not make that leap and, a few months in, left. It was hard, because all we wanted was their brains in the game.

Today things could not be more different, and our people are actively participating in Cornman Farms’ lean transformation. There is a common understanding that it is everyone’s responsibility to not only do the work, but also improve it. It is thanks to our people’s great commitment and their support to our lean system that today we are able to plan around 200 events per year – something that would have been unthinkable when we opened six years ago. We are currently seeing a 25%-30% increase in sales year on year, with the same number of full-time employees (16 people, to which we hire 30 to 40 seasonal hires).

The biggest lesson I have taken home after six years? That it’s much more fun to put the work with the people and learn with them than to be the expert. In fact, I have completely accepted that I am not the expert in a lot of things in my business. I love the fact that there are people who have been with us only a few months and already know more about certain parts of the company than I do. Truth is, it is liberating to not be expected to have all the answers. It’s nice to be on the intellectual side solving problems, rather than the go-to firefighter.